The last month has been an adventure with lots of great experiences and I can proudly say that I have been here for two months! Time has gone so fast and this keeps reminding me to live in the moment and enjoy as much as possible while I’m here. 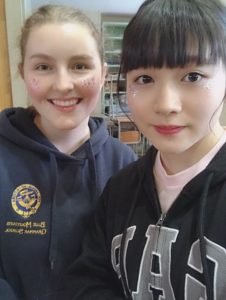 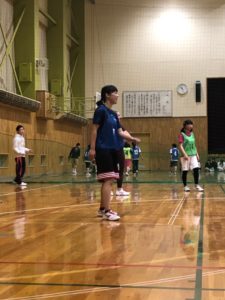 Ball game tournament! (in the second picture you can see my arm and leg while I’m playing basketball)

School – School life has been so amazing! The school I go to is quite similar to my school in Australia so it already feels like home. Recently we had a 2-day ball game tournament. The classes/homerooms versed each other in futsal, basketball, volleyball, table tennis, and dodgeball. You volunteered for the sports you wanted to play, I did volleyball and basketball, which was really fun and everyone was quite competitive which made it even more fun. The class cheers were also really intense with some classes making up songs with dance moves to cheer on their team. Also, all the girls had ribbons in their hair and glitter on their face which of course I joined in on! Spring break starts next week so we have 2 weeks of holidays and once we get back we become second-year students (Year 11). I got to choose a few different subjects that I’ll be taking when I return one of them being calligraphy which I’m looking forward too. My clubs are also still great. There is a big volleyball tournament coming up so everyone’s training hard, all my teammates are so friendly and helpful though so I’m enjoying it. My friend at tea ceremony started teaching me some of the movements last week which we will continue on Monday so hopefully, when I get back I’ll be able to perform a tea ceremony! And newspaper club is going well, last week we went out and reviewed the food at a local cafe, I also (with the help from a friend) wrote an article for the school newspaper about the differences between Australia and Japanese schools! 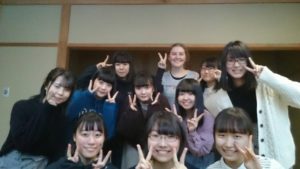 Events – The Year 12’s at my school had their graduation ceremony a few weeks ago which was cool to watch. All of the girls wore traditional kimonos which were beautiful and some of the guys wore the male version however most of them were in suits. The ceremony was quite different from what I’m used to in Australia but the feeling was the same. There was a video at the end and as soon as it started playing I was surrounded by crying. It was a nice farewell though. There was also a 5.5 magnitude earthquake that hit near my town which I got to experience. It was really weird at first because I didn’t know what was happening, everything just started shaking (nothing crazy like the movies though). It only lasted about a minute and there were no aftershocks so it was nothing to worry about. When I went to school the next day and said it was fun everyone looked at me as if I was crazy! 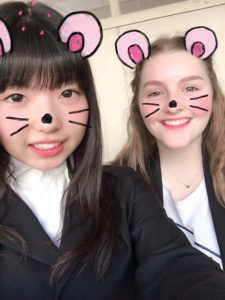 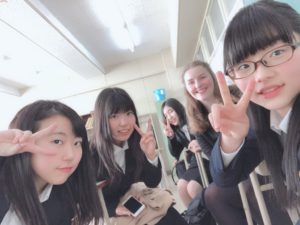 Friends – It’s starting to get warmer so I’ve been out with my friends a few times this month which I’ve enjoyed. There is a big shopping centre close to my house and I went to an arcade there with a few friends last week. We played lots of different games there and then we had sushi for lunch. I also went to one of my friend’s houses and I had cheese fondue for the first time (which I love now) and I talked with her and her mum. I’m also planning a few things for the upcoming spring holidays! 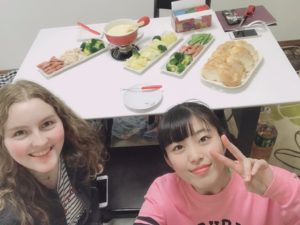 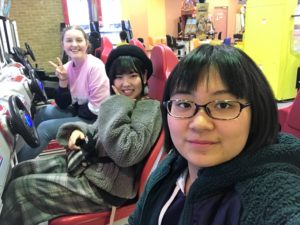 Likes – I’ve loved all the winter soups and noodle dishes so far! I’m not kidding when I say I think my whole body is made out of ramen/udon noodles now. I’m also loving the beginning of spring! Hokkaido’s cherry blossoms bloom a bit later than the rest of Japan because it’s so cold here but I’m excited for the coming of cherry blossom season and the warmer weather.

Hard times – I’ve only been homesick once so far so I think I’m quite lucky. My friends, family, and school are all really amazing so I feel really comfortable here. There are sometimes where I wish I could hug my family but I know that day will come and I have to cherish each of my days here because I won’t be here forever. Also, I didn’t even think about it before I came here but buying certain things at supermarkets is a bit difficult. I can only read a small portion of what’s on the labels of things (shampoo, conditioner, moisturiser, toothpaste, medicine) so I don’t know what it does or what it has in it which has been difficult at times. There have been a few times where I’ve been staring at products in the grocery store for a while until I can decipher at least one word.

Improvements – The next few months I want to put effort into learning the grammar structure of the language. I know lots of words but I currently just put the words together in the hope that the other person will understand what I’m saying. My Japanese teacher here has bought me some books so hopefully, I’ll be able to make flowing sentences in the weeks to come. 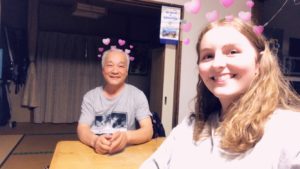 Thanks for sharing Eloise, look forward to hearing about your holidays! 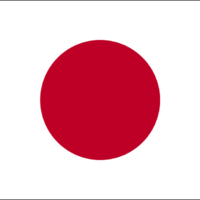